Skip to content
Item added to cart. View cart and check out.

Cleaning tags and graffiti from Wylie Street to Memorial in Atlanta, Georgia

It might have looked suspicious– the woman stooped over, back turned, applying spray paint to an Atlanta BeltLine retaining wall. At least that’s what a concerned citizen thought as he called out to her, “You should be ashamed!”

Turning to face her accuser from her task of transforming a vulgar graffiti tag into a flower until a proper clean-up could be done, the woman’s City of Atlanta shirt clarified the situation for the citizen, who quickly apologized.

After seven years as BeltLine District Manager for city’s Office of Parks, Tucker Hutmacher is both tickled and exasperated as she recounts the anecdote.

“It’s great to have people stop when they see something wrong—although these days, that’s not always a good idea. When I meet citizens, who are passionate and upset about trash or graffiti, rather than complaining, I tell them to get involved! I need your help!”

Atlanta BeltLine, Inc. is the implementation agency for building BeltLine infrastructure, but it falls to Hutmacher’s “Small, but MIGHTY BeltLine” team, as her email signature touts, under the city’s Office of Parks, to keep the beloved parks and multi-use trails beautiful. Leading a team of six full-time staff and six seasonal workers, Hutmacher is responsible for the lawn care, clean-up, including three restrooms and the daily garbage removal of 182 trash cans around seventy-three acres of BeltLine parks and trails, from Tanyard Creek down to the Southwest Connector Spur Trail. Her team also happens to be the only one in the department with a graffiti crew. Fully staffed only three of the seven days a week they operate, their schedule runs on a ten-day cycle to cover all that surface area and make dents in the never-ending task list. 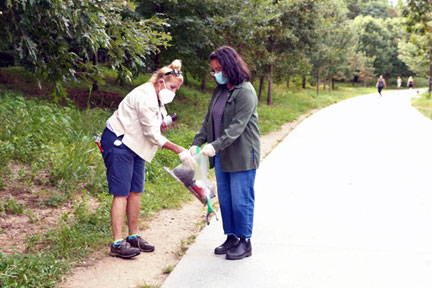 When people make comments about the litter or graffiti on the Atlanta BeltLine, Hutmacher submits a ticket for clean up, but also encourages citizens, “rather than complaining, I tell them to get involved! I need your help!” - Tucker Hutmacher

"Asking to remain anonymous, the Graffiti Guru walks the Eastside Trail through Reynoldstown daily and has adopted this stretch as his, cleaning tags and graffiti from Wylie Street to Memorial, and even down to Glenwood. As soon as he spots a tag, he returns home to get cleaning supplies."

“Previously I managed both greenhouse work and the BeltLine for Parks, but the BeltLine grew and grew, and that’s been my sole responsibility for the last two years.”

Hutmacher transforms a crude graffiti tag into something more family-friendly until her crew can properly pressure wash the corridor.

On a given day, the crew does a garbage run for the 182 bins, cleans and restocks the restrooms, blows walkways, mows lawns, cleans up litter, and, depending on the people available, removes graffiti. Partnerships have been the key to getting things done, and given the scope and assortment of work involved, Hutmacher probably has one of the most coveted contact lists in town.

“I love my job. Every day is different,” says the former teacher of horticulture who made her way to the City following the 2009 recession that terminated non-core programs in schools.

“We usually have several volunteer programs to help with partners like Park Pride, Adopter Groups, Atlanta BeltLine Partnership or Georgia Tech, to name a few, but those have closed with COVID.”

The cancellation of volunteer programs, coupled with increased trash piling up from restaurant to-go orders, have left the Parks BeltLine crew even more overloaded. To alleviate the trash problem, additional bins were placed in high-traffic areas, and ABI pushed out an additional etiquette campaign reminding folks to properly dispose of waste. 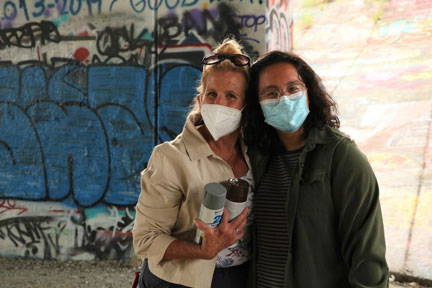 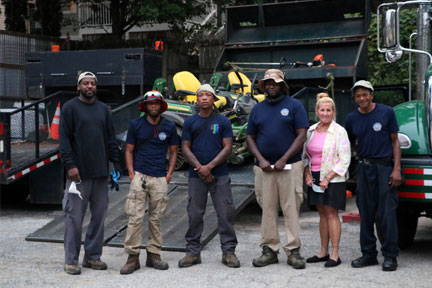 A crew of six permanent employees and six seasonal employees are responsible for cleaning and maintaining ALL BeltLine trails and parks.

Recently, the Parks BeltLine team was the subject of a letter writing campaign, thanking them for their work.

“Those people took the time to look up our address, write a letter, and put it in the mail. That made everyone feel good, but I would still like everyone to pick up their trash.”

Thank you letters from grateful citizens adorn the exit door of Hutmacher’s office in the Old Fourth Ward, reminding her team that they are doing important work.

Hutmacher is often confronted by concerned citizens, either when she’s out on the trail or in the office. They share their frustrations with dog waste, report incidences of vandalism in the restrooms, or signal the presence of graffiti on different parts of the trail. One such resident on the southern end of the Eastside Trail, who Hutmacher fondly dubbed the “Graffiti Guru” was particularly upset about the graffiti that popped up on the Eastside Trail Extension near his home, so he reached out to her.

“He asked me about what we used to remove graffiti because what he’d found wasn’t effective. I told him about the Citizen Graffiti Removal Kit, and he and began taking it upon himself to clean up graffiti when it appeared.”

Asking to remain anonymous, the Graffiti Guru walks the Eastside Trail through Reynoldstown daily and has adopted this stretch as his, cleaning tags and graffiti from Wylie Street to Memorial, and even down to Glenwood. As soon as he spots a tag, he returns home to get cleaning supplies.

“I don’t want the artists to think their tags are staying there,” he shares over the phone, after completing a clean-up job. “If we can just get a couple people like me, then it would be easy. You only need five to six volunteers to each do a half-mile stretch. The BeltLine is beautiful when it’s tag-free. It’s no place for political messages or f-yous. It belongs to the taxpayers, so it’s all of ours.”

“Litter sticks also work,” Hutmacher adds. “If everyone could just pick up a little bit when they see it, that would be great!”